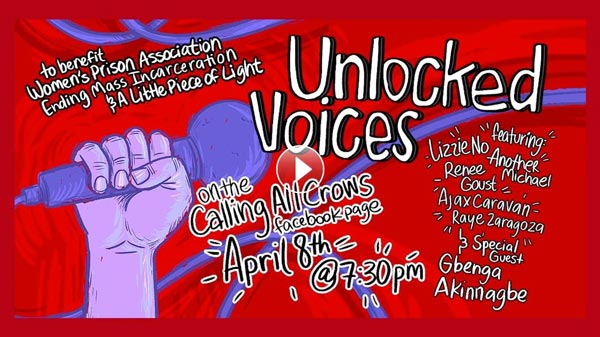 (NEW YORK, NY) – This Thursday, April 8th, with the MultiFaith Ending Mass Detention Initiative, Calling All Crows will be launching the 5th livestream fundraiser for Unlocked Voices at 7:30 p.m. EST in New York City. The event, hosted by Chadwick Stokes (Shipping, State Radio) and Lena Charity-Shapira (Calling All Crows), will feature performances by Lizzie No, another Michael, Renee Goust, Raye Zaragoza and Ajax Caravan with the special guest actor / activist Gbenga include Akinnagbe (‘The Wire /’ The Deuce ‘). Plus appearances from Donna Hylton (A Little Slice of Light), Roslyn Smith (Beyond Incarceration). The proceeds from the night will go to the Women’s Prison Association + A Little Piece Of Light.

Watch via Calling All Crows Facebook Live for Free with Recommended Donation.

Unlocked Voices was launched in 2020 by Calling All Crows with the Multifaith Initiative To ENd Mass Incarceration and has hosted livestream events in Nashville, Boston, Dallas and Charlotte. The events, with 21 artists (including Julien Baker, Maddie Medley, Anjimile), a variety of speakers and 7 local partners raised over $ 25,000 and captured the stories of people directly affected by the mass incarceration problem here in the US.

Regarding the work the Multifaith Initiative is doing to end mass incarceration and call out all crows with votes unlocked, Harlem born and raised community leader and activist John Duckworth stated: “The work of EMI is intended to lead to changes in our society and our legal system that will affect the lives of millions of people. This work raises the voices and injustices of those who have lived through the experience, families, children and even victims, all of whom are affected by mass incarceration. For me, however, this work is personal. The pain of imprisonment, along with the infinite stigma that has been placed on me well beyond the years of imprisonment, leave me with no alternative but to do what I call “the work of the kingdom”.. ”

Raye Zaragoza on attending the event added: “I grew up in New York and I love the energy, the people and the city so much. I am proud to play on this show that honors, supports and centers our imprisoned sisters and works towards the day when we are all cared for and not locked up. “

The Women’s Prison Association is the country’s first organization for women affected by incarceration. New York City spends a staggering $ 1.4 billion a year on corrections. With JusticeHome, WPA’s alternative to the incarceration program, women can avoid jail or jail. Instead, they address the challenges that led to their arrest in the community. It costs more than $ 120,000 a year to send a woman to jail and her children for foster care. It costs less than $ 20,000 a year to offer her an alternative to incarceration at WPA.

A small piece of light should enable and facilitate healing for women, girls and gender-specific persons who are directly affected by trauma and involvement in the criminal justice system. Under the leadership of former detainees and family members of detainees, ALPOL mobilizes those who share their collective trauma caused by sexism, racism, violence, poverty and the criminal justice system. ALPOL offers safe spaces and provides appropriately informed, evidence-based programs to people who want to develop their own life skills, healing strategies and personal decision-making powers. ALPOL enables an exploratory journey in which participants overcome their experiences of successive trauma and their cumulative, debilitating effects. ALPOL enables its base to end the cycle of systemic trauma that the criminal justice system perpetuates.

Calling All Crows is a national non-profit based in Boston, Massachusetts that works with musicians and fans to create change for women through service and activism. Founded by musician Chadwick Stokes and former tour manager Sybil Gallagher, the organization campaigns with thematic local organizations to add capacity and momentum to their work through the platforms, community and creativity of the music industry.

The MultiFaith End Mass Incarceration Initiative (EMI), comprised of Ebenezer Baptist Church, Temple, Auburn Seminary and other interfaith partners, is working on a national initiative to harness spiritual power, human power and resources the Faith Community to End Mass Incarceration The United States. EMI focuses on catalyzing a belief-based response to the problem in a way that enhances existing work and fosters the coherence of belief-based endeavors. Our vision is for multi-faith communities to exercise and reinforce their demands for the elimination of mass incarceration in a committed, wise, and effective manner.

Worth of Eating places, Airline Tickets Might Hold Rising