Home Restaurants In one other difficult 12 months for Boston eating places, these had... 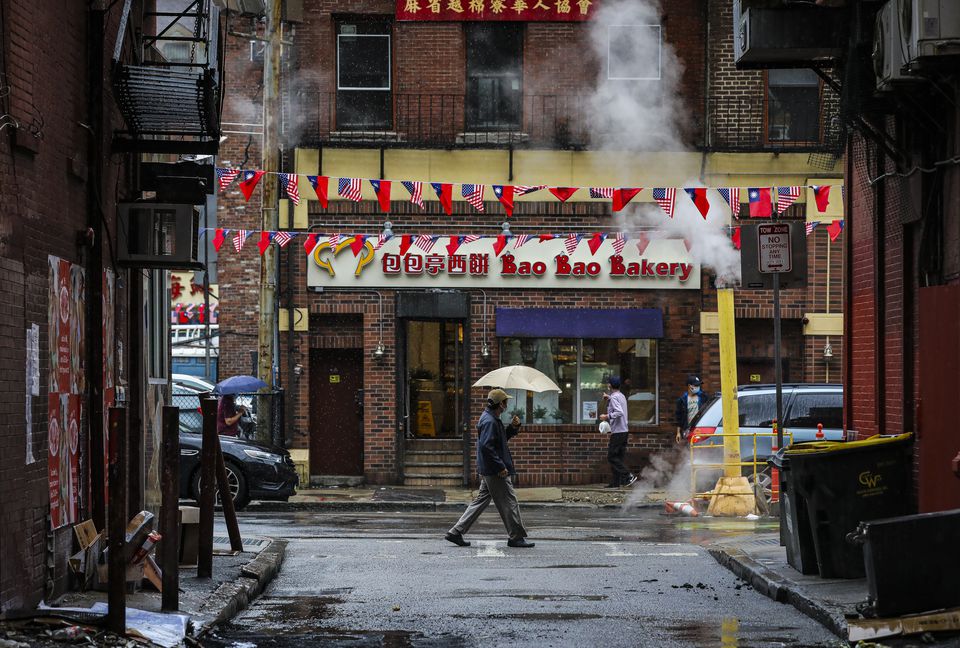 Here are some of the standouts:

The “local” is Brookline. The “taste” is Thai. Mahaniyom is what happens when a couple of expats – co-owners Chompon Boonnak (formerly Shojo) and Smuch Saikamthorn – team up to share what home means to them. This small restaurant with the reduced menu has us smitten with its rambutan salad, coconut milk crab curry, pork and rice sausage, and beef massaman — not to mention standout cocktails and herbal-infused spirits, those with pickled mango and pandan are served. sheet of water. It’s also the rare place to have both eat-in and take-out options.

This seafood restaurant brings style, scene and shrimp cocktails to Dorchester’s South Bay shopping centre. If you never expected to find a glamorous Miami vibe amidst Target and Home Depot, you’re not alone. But the crowds show how overdue The Pearl was — and the Raw Bar, lobster rolls, brunch, and craft cocktails make waiting for a table worthwhile.

A pedestrian walks through Chinatown, our restaurant district of the year.Erin Clark/Globe Staff

Restaurant District of the Year: Chinatown

A historical treasure, Chinatown was one of the first neighborhoods to feel the impact of COVID. Banquets were cancelled, visitor traffic dropped and business collapsed by up to 80 percent in many restaurants. But Chinatown remains, with its fish tanks and steamers with plump dumplings and a strong sense of community. If you haven’t visited or gotten takeaway lately, this is a good time to do so. 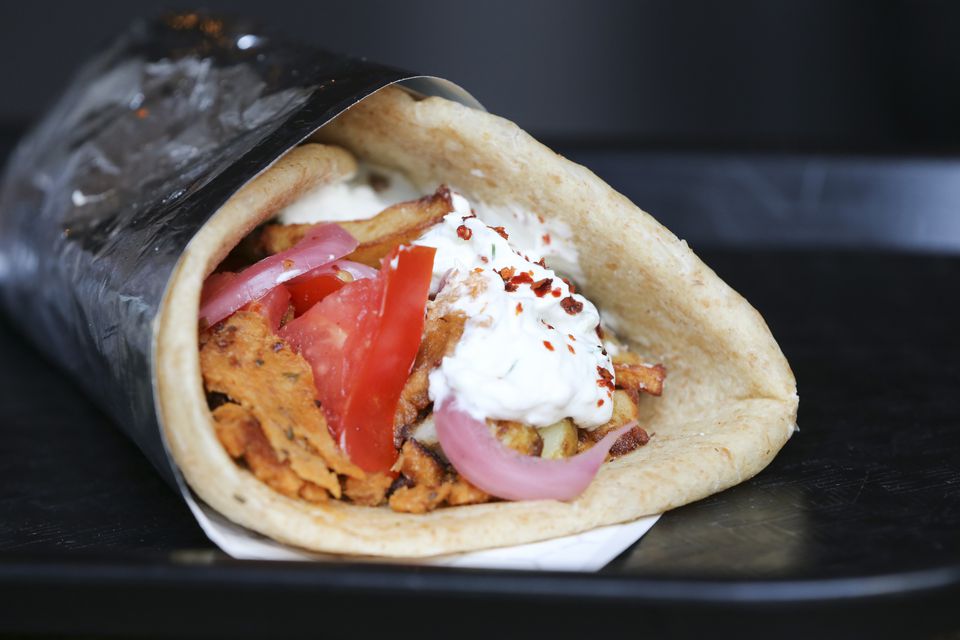 Trend of the year: Plant-based option

Acclaimed New York restaurant Eleven Madison Park made headlines when it announced it would no longer serve animal products. It has been an important symbol of the advances plant-based cuisine has made in recent years, with more and more people choosing to adopt a vegan, vegetarian or flexitarian diet for the sake of their own health and that of the planet. Locally, we saw the arrival of businesses as diverse as Dear Annie (a pescetarian wine bar), Double Zero (a vegan pizzeria), Littleburg (a vegan Mediterranean takeaway), and PlantPub (serving vegan pub grub and craft beer). It finally seems that meatless restaurants can be anything their creators want them to be, from the most casual bar to the most elevated temple of fine dining. 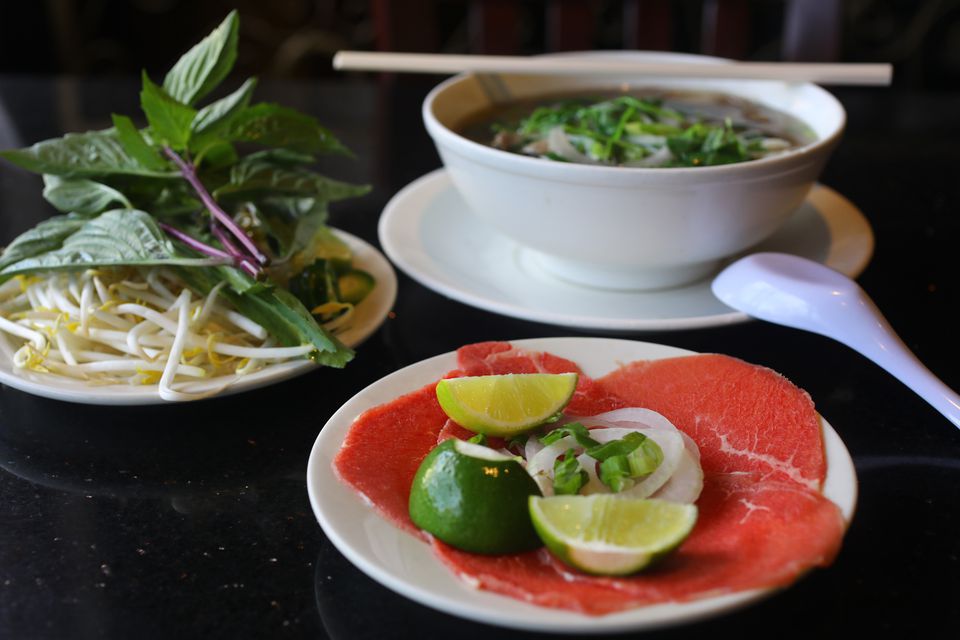 In May, part of Dorchester’s Fields Corner was officially designated a Cultural District. The area, dubbed Boston’s Little Saigon, has long been a center of Vietnamese community, commerce and cuisine. With restaurants, cafes and markets from family favorite Anh Hong to palace of sweet delights Sweet Sip, this is one of Boston’s premier neighborhoods to eat. Now it also has an appropriate name. 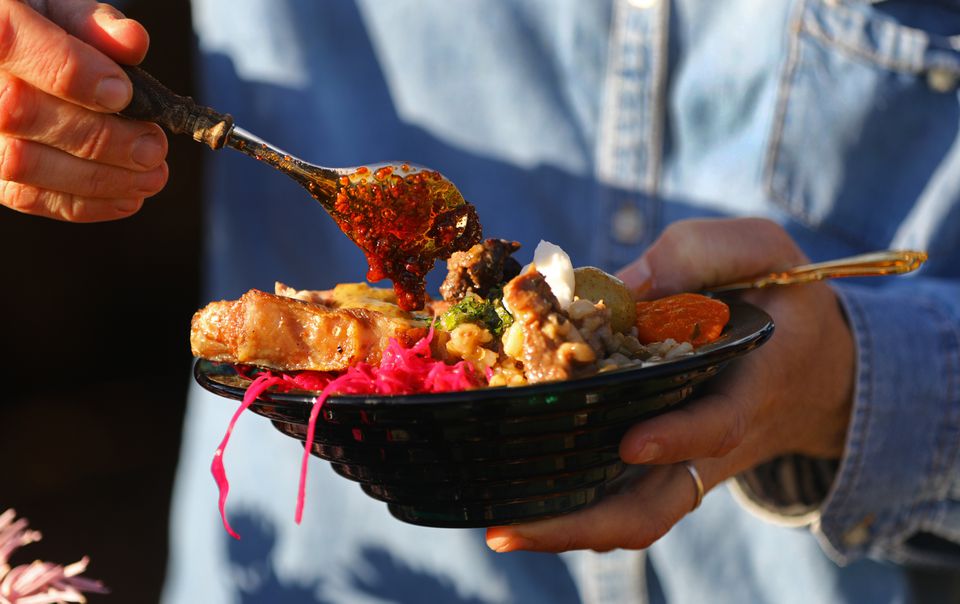 Organized by Aly Lopez and Judy Yao of Open Hearth Gatherings, people come together at Stone by Stone Farm in Orange for a lamb roast.Pat Greenhouse/Globe Staff

Chefs have been promoting farm-to-table dining for years, but the guest is rarely transported to the farm. Open Hearth Gatherings shifts the focus of the meal, bringing groups into the country to experience the harvesting, preparation and eating of food where it’s produced. Participants work together, get to know each other, and then feast in a beautiful outdoor setting. It’s COVID-friendly, it’s community and it feels meaningful. 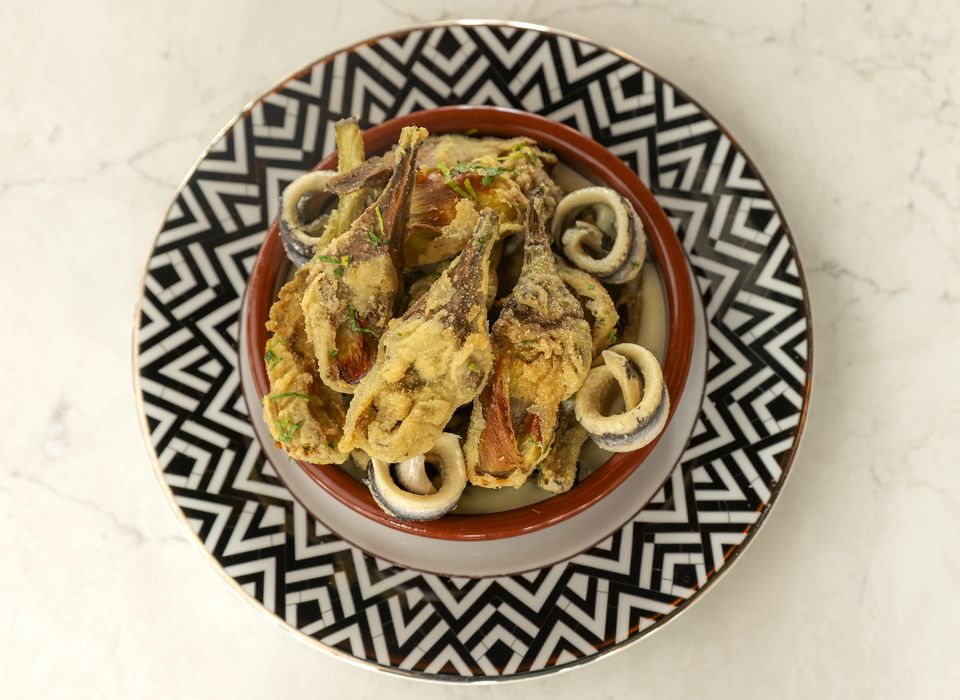 The Artichokes & Boquerones at Atlántico.Contributors to Matthew J. Lee/Globe

The open secret of this South End tapas joint is that it really is a seafood restaurant. The best dishes focus on the fish. For a single bite that encompasses the glory of the sea (with a Spanish accent), order the Erizo de Mar from the Crudo section of the menu. It’s toast with sherry butter and fresh, deliciously salty Maine sea urchin. No more, no less. It’s perfect (but while you’re there, don’t miss the alcachofas & boquerones, fried artichokes with white anchovies on chive aioli). 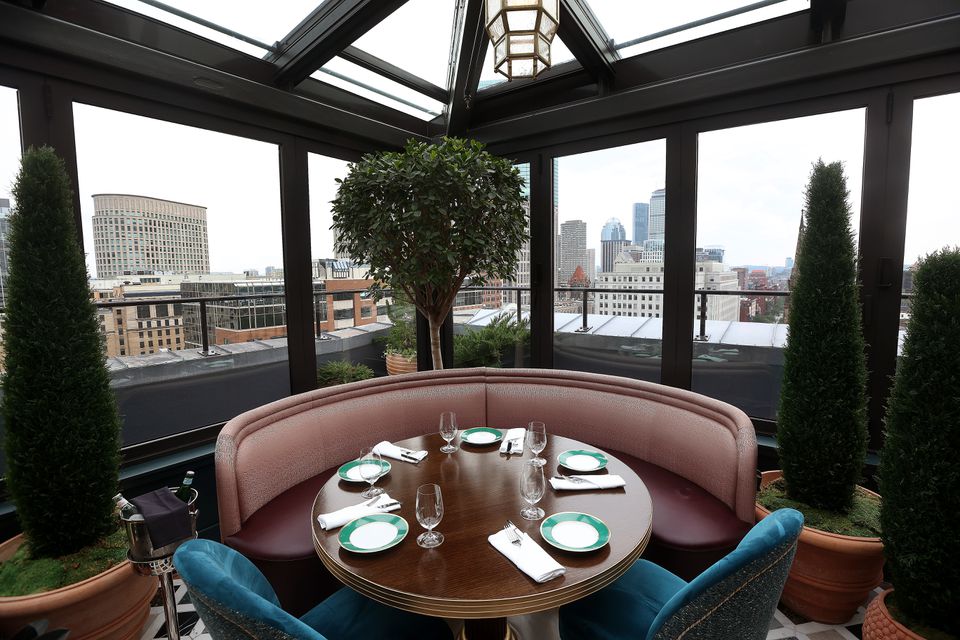 The Contessa restaurant at the top of The Newbury Hotel is a stunner.Barry Chin/Globe Staff

It’s no surprise that the rooftop restaurant at chic The Newbury hotel (formerly the Taj and the Ritz-Carlton) is an absolute stunner. But it’s a total stunner. New York-based Major Food Group’s first Boston foray, the Italian-focused Contessa is a plant-filled, pastel-hued, glass-enclosed space where diners enjoy the Back Bay views from pink velvet banquettes. It’s a feast for the eyes, inside and out. 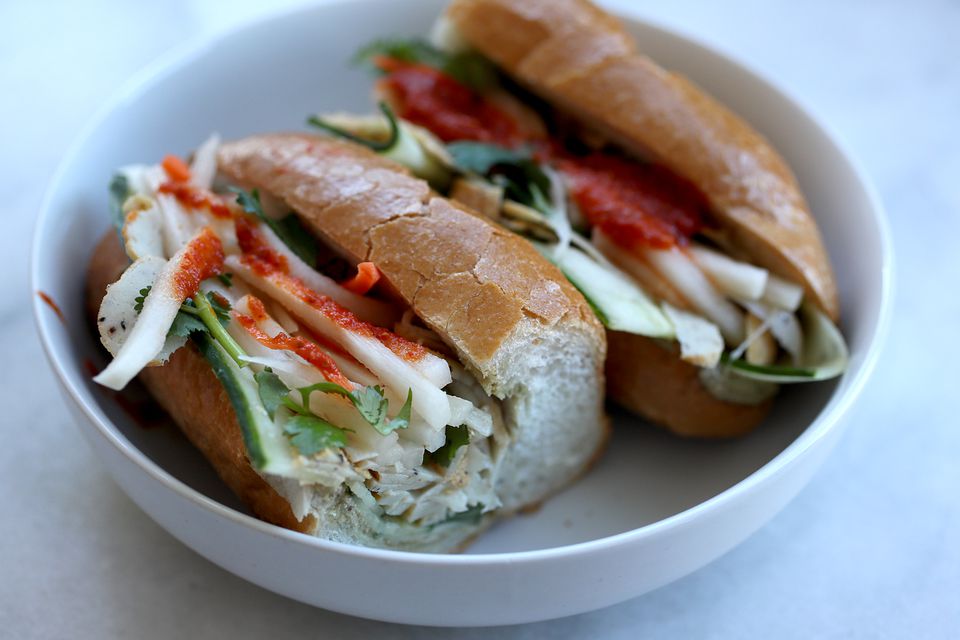 Banh mi at the Cicada Coffee Bar in Cambridge.Suzanne Kreiter

Combine artistic vision, Vietnamese taste and Cambridge sensibility and place it in the hands of warm, creative, passionate and quirky people and you have Cicada Coffee Bar. Central Square eatery run by Vinh Le and Duong Huynh is on Pho -Specializing in noodle salads, banh mi and excellent daytime coffee drinks; Cheffy Viet delights (lemongrass duck tartare, monkfish with turmeric, dill and vermicelli) and natural wine on weekends; and an eternal, supernatural ability to sustainably pull humans into its orbit. Nestled beneath warm radiators on a large property in Chelsea, enjoy artful interpretations of Peruvian cuisine by chef and owner Jose Duarte, long-time chef of North End favorite Taranta. Tambo 22 appears like a mirage, an Andean outpost, with indigenous ingredients such as tarwi bean, Amazonian fish paiche and an array of chilies and herbs. They also find their way into cocktails like the Chicha Morada Sour. 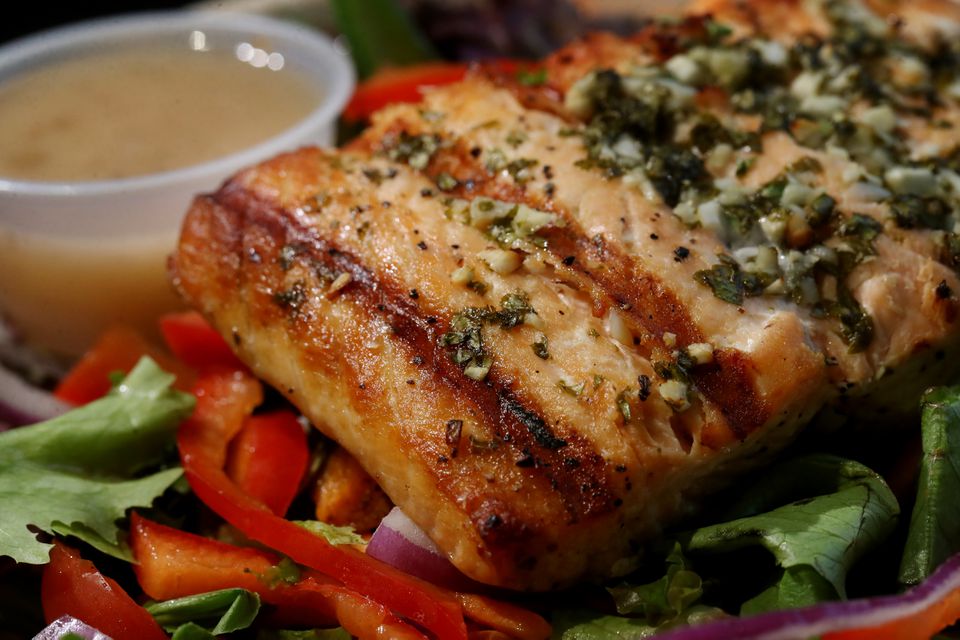 Co-owners Cassandria Campbell and Jackson Renshaw are creating a stationary version of their namesake food truck, and Codman Square in Dorchester is getting a delicious addition. Fresh Food Generation serves a menu of healthy, flavorful dishes you’ll want to eat regularly, from empanadas to jerk chicken to kale salad and macaroni and cheese. 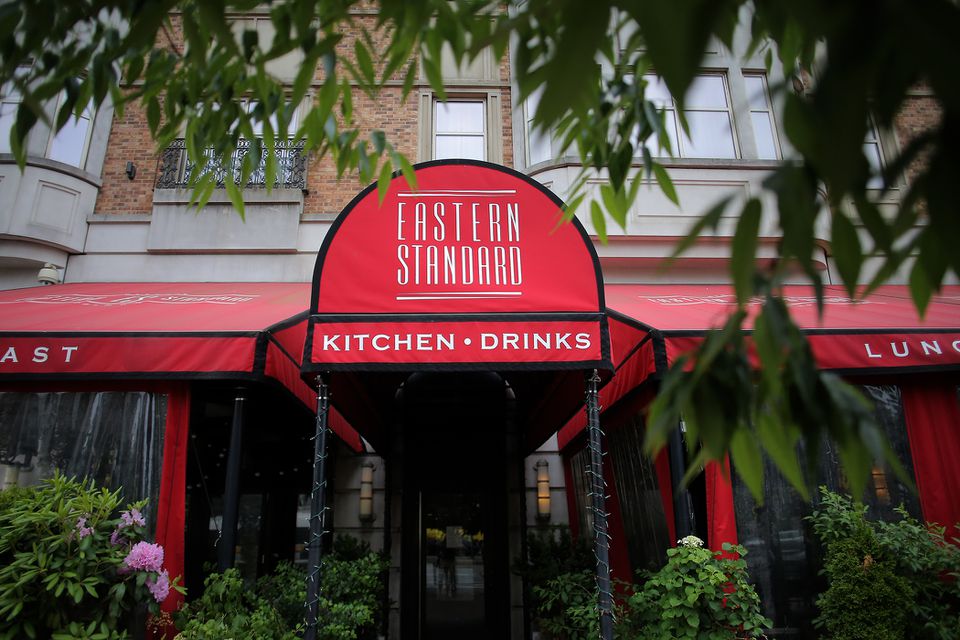 #1 Thank You For Your Service Award: Eastern Standard

Eastern Standard closed permanently in February after more than 15 years in business. The news came as a blow to so many who have spent time in Boston. The Kenmore Square on-call service was popular, with people from all walks of life coming for pre-game drinks and snacks, dates, birthday meals, family brunch, or (most likely) all of the above. There was something for everyone here, from the fussiest kid to the most discerning foodie to the craft cocktail lover looking to expand their knowledge. Goodbye Eastern Standard, and thanks for all the bone marrow, baked rigatoni, and butterscotch bread pudding. 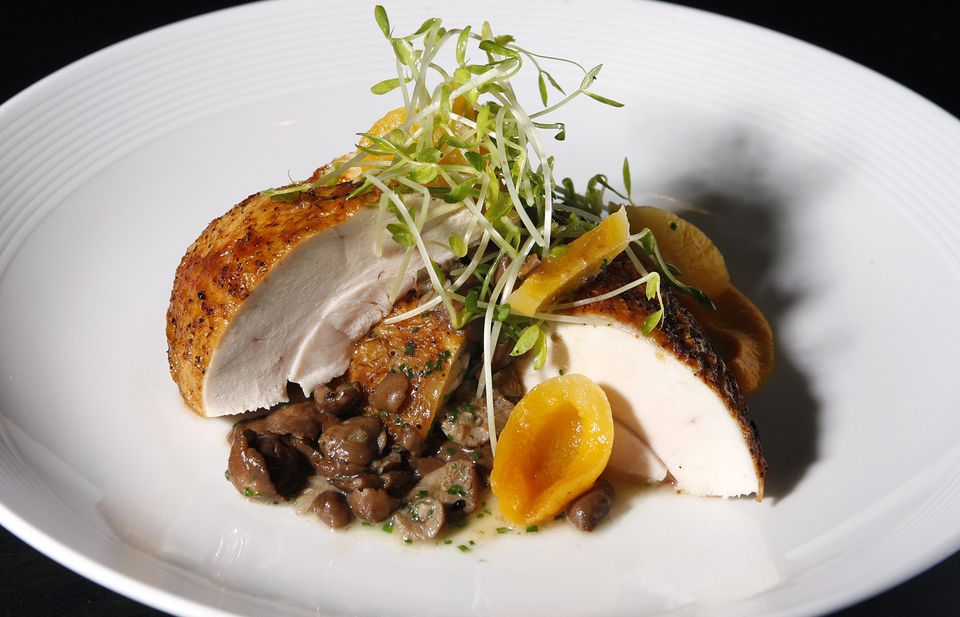 Thank You For Your Service Award #2: Craigie on Main

Craigie on Main began as a Craigie Street Bistrot in 2002 and moved to Main Street in 2008. In October, chef Tony Maws launched the Central Square restaurant. Today, we take for granted things like farm-to-table food, frequently changing menus, market-driven dishes, nose-to-tail cooking and ‘chef’s whim’ menus. It’s easy to forget how wild and welcome it all was when Craigie debuted, and how groundbreaking the restaurant’s approach to the area was.

‘The Bachelorette’ recap: Gabby and Rachel’s journey begins with an surprising twist | Leisure

The Greatest Bars and Eating places for Solo Eating in Boston