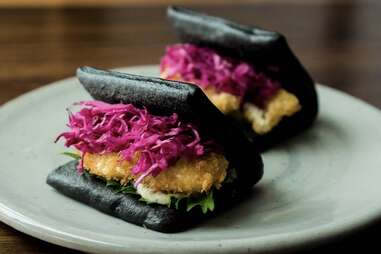 With another year in the books, it’s time to reflect on the highlights of the year. And while 2021 may not have delivered everything we hoped for, there were some serious bright spots.

Sure, we had to forgive Tom Brady’s first Super Bowl win without us, but we’ve also seen some of our favorite bars finally reopen and welcomed a slew of new restaurants to the city, seemingly against all odds. For all of the ups and downs of this year in Beantown, this city’s incredible bars and restaurants have brought us some much-needed comfort and opportunities to celebrate – and we couldn’t have survived 2021 without a handful of dishes from new restaurants. From savory rotisserie chicken sandwiches to a new take on the classic New England clam chowder, here are the best dishes we’ve eaten this year.

A dish sure to turn heads, PAGU’s Squid Bao Roll adds a colorful touch to any table at PAGU. Ever since owner Tracy Chang created an oyster-inspired Po’ Boy with the deep purple, tender steamed bun, the dish has made quite a significant mark on the restaurant’s menu and Boston’s culinary scene. You can now get this celebrated snack with unagi (grilled eel), pickled green apple, and spicy togarashi. And as if the chef didn’t make enough of an impact this year with her culinary prowess, she’s also been helping the Boston community and beyond as a co-founder of two nonprofits, including Project Restore Us, which provides essential labor for families in low-income areas and high COVID-19 area with food being packed by restaurants.
—Jillian Hammell, Thrillist Contributor 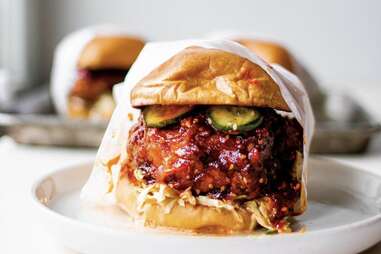 There has been a lot of hype surrounding the chicken sandwich in recent years, and popular restaurant chains continue to ride the wave. However, if you’re looking for the highest-quality chicken sandwich in the game, Fiya Chicken near Boston University blew the competition out of the water this year. Korean Fried Chicken Sandwich is known for the crispiness and powerful combination of flavors that make up the spot’s Korean Fried Chicken Sandwich. By using a buttermilk kimchi brine and frying each cut of chicken twice, Fiya Chicken achieves an impressive crisp and epic flavor boost in every bite. The sandwich is topped off with homemade pickles, kimchi, and garlic Dijon aioli, but if you want to add more flavor to the mix, you can choose from other homemade sauces like soy garlic, spicy garlic, cider honey mustard, and the signature FIYA Korean pepper sauce.
—JH

The History of Tailgating 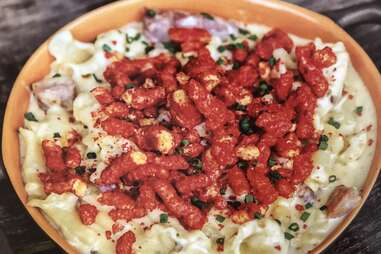 Buttermilk & Bourbon’s second Watertown location made its grand debut in August, and in typical Jason Santos fashion, the Southern-style menu is jam-packed with ultra-flavorful dishes. Santos’ deep affinity with New Orleans is evident in Cajun-inspired dishes like crawfish and dumplings and freshly fried beignets, but if you want to hit the calorie high score, the Aged Gouda Mac ‘n Cheese is a top contender. This decadent dish is loaded with leftover pork, fresh chives, and a healthy dose of sizzling hot dust from a bag of Cheetos, with each ingredient melting together to form a richly flavorful array that pairs perfectly with a bourbon flight.
Here’s how to try: Reserve a table at the Back Bay or Watertown location through OpenTable. Order collection via the website.
—Jared Ranahan, Thrillist Contributor 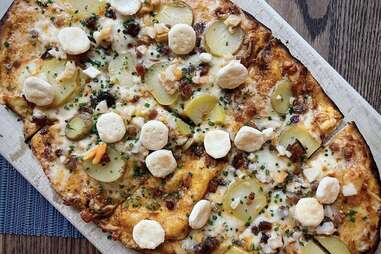 Clam chowder is a tried-and-true New Englander classic, but there’s always room for innovation when it comes to this popular dish. Case in point: the chowda flatbread. This deconstructed clam chowder pizza is one of many hearty seafood dishes found at The Banks Fish House, a Robert Sisca-owned restaurant that arrived in Back Bay in July. Dressed with a hearty creme fraiche sauce and loaded with smoked bacon, potatoes, mussels and oyster crackers, this dish is a seriously fun and delicious take on the most famous soup in New England — and probably the nation.
Here’s how to try: Reserve a table through OpenTable. Order pickup and delivery through Doordash.
—JR 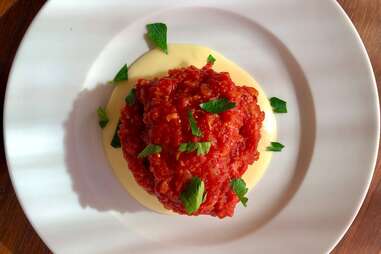 A brand new addition to Boston’s food and drink scene, the Charles Hotel’s Bar Enza is already off to a strong start. Led by Michelin-starred chef Mark Ladner, the cozy neo-trattoria has been serving up a slew of flavorful Italian dishes and expertly prepared spritzes since September, but for certified meat lovers, the meatball behemoth is pretty hard to beat. Ground pork, beef and veal come together in a ball of mammoth proportions, which is then gently placed on a bed of mashed potatoes and bathed in a hearty helping of tomato sauce.
Here’s how to try: Reserve a table through Resy
—JR 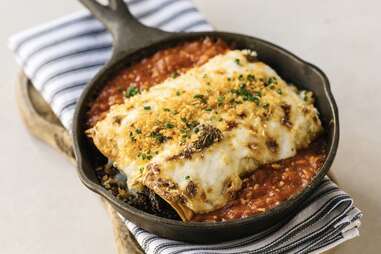 Do you think Greek food is all gyros and olives? think again In the heart of Back Bay, Krasi continues to highlight the diverse array of flavors and ingredients found across Greece – and with around 200 inhabited islands, they certainly have plenty of options to consider. This year Krasi launched Pastitsio Rollo, a hearty dish full of braised short ribs, cinnamon and homemade egg noodles. Popular on the western Greek island of Zakynthos, this dish is just one of many at Krasi that demonstrates the restaurant’s leadership position in showcasing the deep culinary roots of this Aegean nation.
Here’s how to try: Reserve a table through OpenTable. Order collection via the website.
—JR 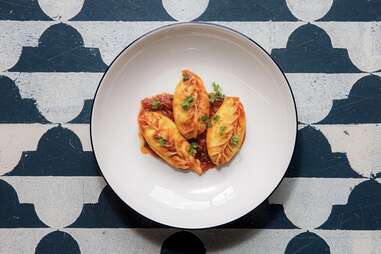 Culurgiones at the Bar Volpe | Photo courtesy of Bar Volpe

James Beard Award-winning chef Karen Akunowicz, former Top Chef nominee, only introduced Bar Volpe in November, but the menu has already made its mark on the city. In particular, the Southern Italian-inspired restaurant’s culurgiones, stuffed with potatoes, goat’s cheese and traditional tomato sugo, are an early favorite. Uniquely shaped pasta from Sardinia, Italy, is traditionally stuffed with potatoes and mint, then folded and squeezed to enclose the flavorful filling. Having perfected the preparation of homemade Sardinian culurgiones during her time in Modena, Italy, we have to thank Akunowicz for bringing the dish to Boston.
—JH 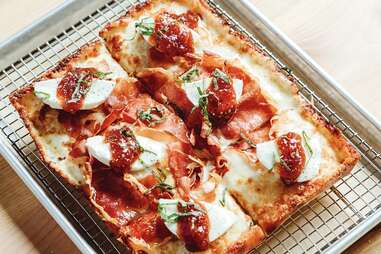 If you’re craving Detroit-style pizza, you no longer need to book that Michigan flight — Night Shift Brewing’s Lovejoy Wharf venue has eight different flavors of the signature Rust Belt dish just steps from Zakim Bridge on the brought to market year. Not content with simply buying ready-made batter, the brewery creates their base using locally sourced flour and subjects it to a 24-hour fermentation process to ensure maximum freshness and flavor. For the pepperoni pizza in particular, Night Shift buys Ezzo pepperoni to offer a Detroit-style dining experience that’s as authentic as it is delicious.
Here’s how to try: Reserve a table through OpenTable
—JR 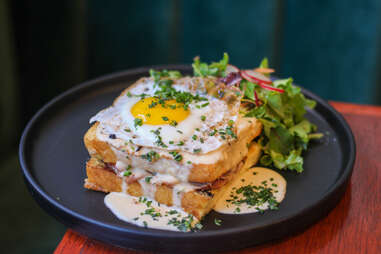 Brought to you by founders Antoine and Anaïs Lambert, this newly opened Parisian bistro brings modern French cuisine with a trendy aesthetic to Boston’s Back Bay neighborhood. Highlighting the cuisine’s multicultural roots, the restaurant offers everything from sweet and savory crepes to plantains, but the real standout is the brunch menu — the Croque Madame. Those who know the dish may say, another croque madame? But Cafe Sauvage masters the dish, which combines brioche, dijon, jambon de Bayonne (smoked ham), mornay (cheese-flavoured cream sauce) and a fried egg to sheer perfection.
—JH 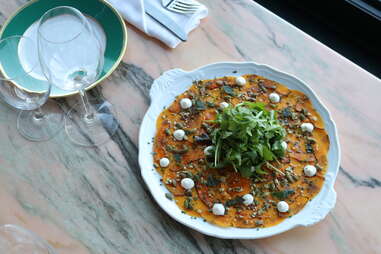 Contessa, located on the rooftop of The Newbury Boston (formerly The Taj), has quickly made the hotel one of Boston’s most popular restaurants thanks to New York-based Major Food Group. This spring, founders Mario Carbone, Rich Torrisi, and Jeff Zalaznick opened this trattoria-style restaurant with a menu of decadent dishes, most notably the vegetarian pumpkin carpaccio. Vegetarian friendly and available on Contessa’s brunch menu, the dish puts a twist on the traditional carpaccio by substituting pumpkin and topped with arugula, pumpkin seeds and the sweet and sour flavor of agrodolce.
—JH

‘Summer season Going To Be Boomtown’ For Bars & Eating places,...

Joannie - May 1, 2021
0
(CBS Local) - Bar Rescue returns for season eight on the Paramount Network and host Jon Taffer is excited to be supporting bars in...
Go to mobile version