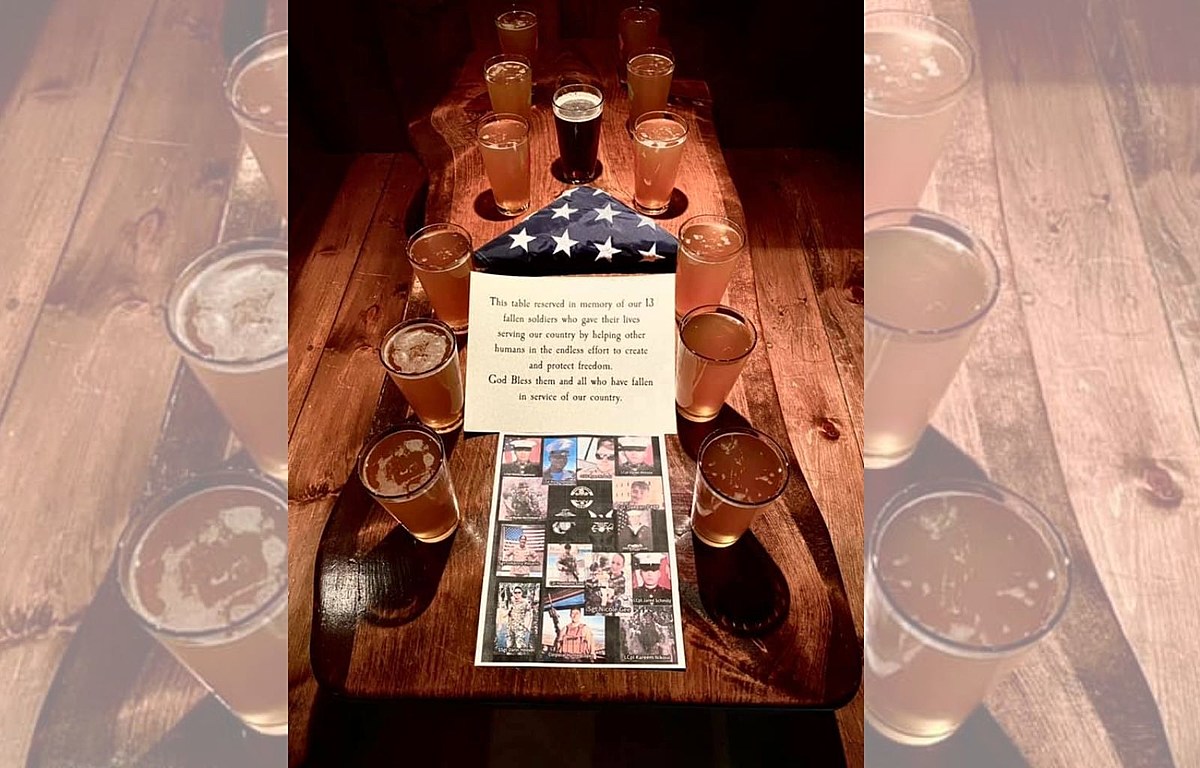 Devastation broke out last Thursday, August 26th, when it became known that there had been an attack in Kabul, Afghanistan, in which several Afghans and 13 US soldiers were killed. The identity of the 13 lost remained a mystery until the heartbreaking list of soldiers who made the ultimate sacrifice was revealed over the weekend, and it included a local New England soldier – 25-year-old Sgt. Johanny Rosario of Lawrence, Massachusetts.

Make no mistake, it would have been just as heartbreaking if we didn’t have a local connection to the tragic loss, but the fact that we do it only makes it tougher.

You may have noticed that something interesting is happening at various bars and restaurants not just in Maine and New Hampshire but across the country over the weekend. Restaurants set aside a table in their establishment labeled “RESERVED” and either poured 13 beers on tap or opened 13 bottled beers and left them there.

The tables were draped with either American flags or army boots – in one place a former Marine even bought the 13 beers and left his uniform in the center of the table. And magically, even if it was only on the radar of time for a brief moment, we were all brought together for something.

Scrolling through social media first on the weekend, be it Facebook, Twitter or Instagram, seeing pictures of 13 beers on a table with a memory of the lost was just … respectful. Heartbreaking to look at, but still respectful.

But then the comment area of ​​the various images began to fill up, and while respect remained, unity also began to form. Agreement on the loss of 13 young lives in such tragic and senseless ways. Suddenly the pause button seemed to have been pressed during the political debates. The usual vitriol, digitally fired between strangers on social media, faded as we all seemed to find common ground and unity through heartache. In a way, it was reminiscent of 9/11 and the Boston Marathon Bombings, where the division went out the window and we were all on the same side of the field.

Even in a seemingly deleted post on the u Local New Hampshire group on Facebook when one commenter sadly channeled all the negativity in the world by commenting, “Most of them weren’t even old enough to drink, that’s stupid “Amid a post highlighting one of the many 13 beer tributes in the area, other commentators have come together to stand up for the tribute.

The ONLY negative thing I have to say about this whole situation is that it takes something like this to create unity at all. Everyone who has an individual opinion and not everyone else’s makes the world so interesting, but I have a feeling nowadays that if your opinion differs from that of others, it is automatically wrong and only through a dramatic verbal (or digital written) attack (not even a debate).

Imagine how much less stressed we would all be (and probably more sane) if only we acknowledged the fact that we can sometimes have different opinions on a subject, but still be on the same side of greater good for all of us stand? Imagine how happy we would be in our lives and in general if it weren’t for a mind-boggling argument every single day on a subject with different opinions.

Hopefully one day we can go back there without a tragic event having to happen to start it. For now, let’s focus on sending all of the love, thoughts, prayers, and positive healing vibes to the family and friends of these 13 soldiers we have lost.

As a tribute to the 13 soldiers we lost, scroll through 100 years of American military history

READ ON: Scroll to see what the big headlines were in your year of birth

Chef Daniel Boulud on the function of eating places in post-pandemic...

Joannie - June 8, 2021
0
Sometimes it just takes a civilized meal to make us feel like ourselves again.The word "restaurant" actually comes from the French word and means...
Go to mobile version